In general, ZOO employs two methods.  To learn more about the species, the first step is to organise scientific workshops such as Conservation Assessment Management Plan and Population Habitat Viability Analysis. The findings will be used to develop educational materials. The other method is to create materials related to the current crisis, such as human-animal conflict, climate change, and so on.  Until now, ZOO has developed 20 different themes such as primates, bats, rodents, bears, herptiles, animal welfare, daily life wildlife, and so on, with innovative packets, posters, drama kits, booklets, brochures, and so on.

ZOO conducts education programmes directly or through a variety of partners, including zoos, forest divisions, non-governmental organisations (NGOs), individuals, and so on.  During various wildlife events, if the materials are available, or upon request, ZOO sends the materials to partners to conduct education and awareness programmes.  Below is an example.

With the assistance of a CEPF grant, ZOO conducted a status assessment of freshwater ecosystems and reptiles in the Western Ghats in 2013 along with the IUCN Freshwater Biodiversity Unit and the Global Reptile Assessment Unit . To disseminate the results of the preceding project and raise awareness among local communities by involving a variety of stakeholders, ZOO applied for and was awarded another project through CEPF. The assessment reports from the above workshops served as the primary information source. The project included five Western Ghats states: Kerala, Tamil Nadu, Karnataka, Goa, and Maharashtra. The project involved local communities and community leaders, school teachers, educators in schools, non-governmental organisations (NGOs), forest personnel, policymakers, and journalists.

The Status and Distribution of Freshwater Biodiversity in the Western Ghats, India 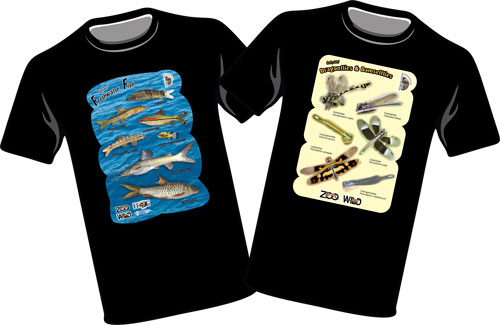 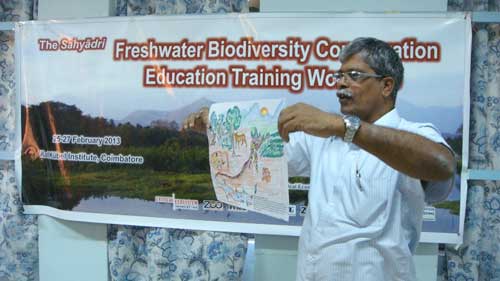 The Sahyadri Timeline by Goa participant

A three-day trainers training on Freshwater Biodiversity Conservation Education was conducted by WILD/ZOO at Coimbatore inviting selected educators from five states (Kerala, Tamil Nadu, Karnataka, Goa and Maharashtra) of the Western Ghats. This CEPF sponsored project is the follow up of the Western Ghats Freshwater Biodiversity Assessment report published by ZOO/IUCN Biodiversity Unit in 2011. The objective of this three-day training is to take the assessment results of the report to a wide range of stakeholders such as local people, students, community and also journalists living in peninsular India. The aim of the training is to empower educators to teach about freshwater biodiversity and its conservation that can be practiced with their local audience in the Western Ghats area and to demonstrate innovative teaching and learning techniques designed to change human behaviour for the better. As part of this project a teaching manual has been developed along with a variety of education materials that was used throughout the training. About 17 educators took part in this training and utilizing the resource materials used during the training, they will be reaching out to a wider audience involving journalists. This training is a collaborative effort of Conservation Breeding Specialist Group, Conservation Research Group, Kerala, Freshwater Fish SG – South Asia region, South Asian Invertebrate Specialist Group and ZOO’s Educator Network. Training report published in ZOO'S PRINT Magazine 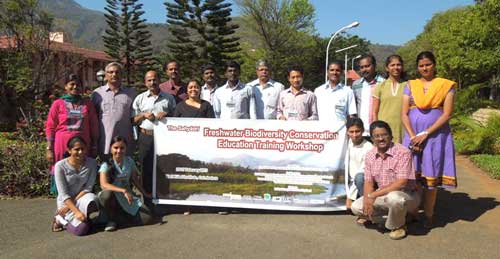 Education Programmes conducted by the Partners

With the support of the identified focal points, ZOO conducted a series of educator skills training and awareness programmes in five Western Ghats states. A total of 17 programmes were conducted throughout the region. The overall objective of the training is to impart knowledge about the status of the Sahyādri Freshwater Biodiversity and to bring about attitudinal change among students and other target groups towards conservation of the species. The Sahyādri Freshwater Biodiversity Teaching Guide and other education materials developed exclusively for this in 5 different South Indian languages were used throughout the trainings.  Complete report of the workshop series can be downloaded here.